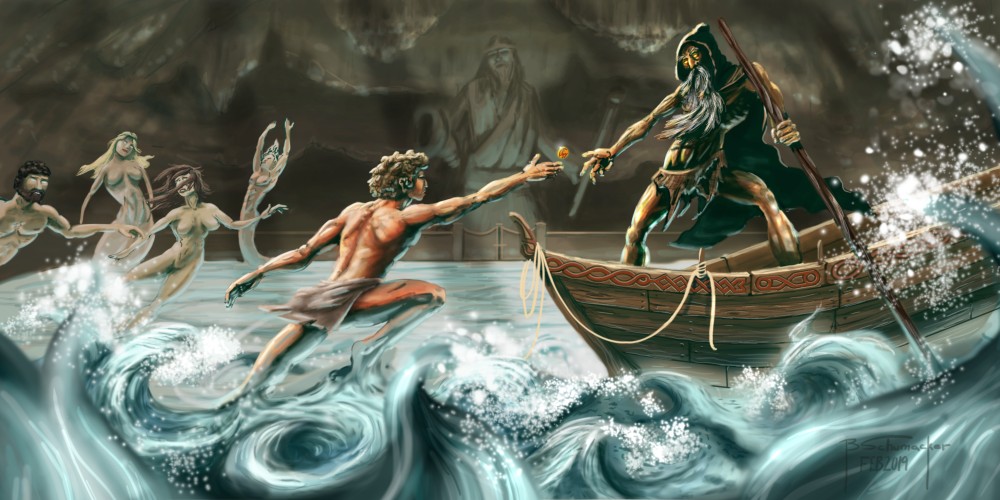 Charon - The Ferryman to Hades

In Ancient Greece people were believed to go to Hades (the underworld) after they died.
To travel to Hades, one would seek passage upon Charon's skiff.
Charon would take the dead across The River Styx to the gates of Hades.
Hades is also the name of the god of the underworld, and Charon served him.
In order to take passage upon Charon's skiff one must pay with a coin.
Thus a coin was often put in the mouth of the dead in Greek culture, to pay Charon.
Those who died without a coin to pay Charon would not make it to the afterlife.
Such people were believed to wander the shores for 100 years, or haunt the world in their afterlife.

In this illustration study, things get much deeper, and I found it incredibly interesting. I can recall often seeing people put coins on the eyes of the dead in movies, books, art and other random cultural references. Is this where that superstition originates from? I would say there must be some relevance.

During my research I also found the entire concept of "Hades" to be fascinating. In today's Western world we often use the word Hades as a synonym for "Hell". But my reading in Greek Mythology did not bring me to this conclusion, outside of the fact that they share the letter "H". All of my reading lead me to believe that Hades was nothing in the sort of Hell at all! In fact some scholars seem to suggest that Hades even had nicer places of dwelling for people who could afford it, or perhaps people who were simply deemed worthy. All of this bares a stricking similarity to Christianity's "heaven and hell", but without any of the emphasis on morality.

It should come as no surprise that when we study Greek Mythology we are bound to find many elements which are regarded as superstition by today's philosophical standards. So it seems irresistible to think that this Greek Myth was a sort of foundational superstition which later evolved into the concept of Heaven and Hell. BUT. With that observation, you also have to keep in mind that the people of this time did not have the same moral goals in correlation with their belief of Hades. Not yet anyway.

So to correctly understand Hades it seems it would be more proper to say "It is the place you go after you die." Period. And with that being established, some conversation seemed to be in debate as to what the conditions might be in this afterlife. Is it pleasant there? Is it a fair place? Do they have good food? These ideas might seem silly in today's society, but they seem perfectly valid to me for the circumstances and knowledge of the times in Ancient Greece.

Now in my imagination, and also per some of my reading, it seems clear that people would question the status of different people and their lifestyles in the afterlife of Hades. If we conclude that there are nicer houses, and lesser houses, then who gets to sleep in which? And why?

So would it be so strange to assume that this conversation ensued for a great many generations, and thus evovled into the modern concept of Heaven and Hell? Or otherwise, have these ideas somehow been related all along throughout the history of humanity? If nothing else, at least we are seeing uncirmcumstantial evidence that people shared a common belief in an afterlife. And so if we "sift the sands" a bit, I think there are many clear developments in beliefs which grew from Hades - and grew all the way to beliefs of the modern world.

In the background of my illustration above you can see a great figure in the background before a gate. That is the gate to Hades, and the figure above is my representation of the god Hades himself. Hades is often portrayed with a conicopia and a staff. As ruler of the underworld Hades was also known to be the God of agriculture and mineral and spiritual wealth. so it wasn't just that he was a ruler of some magical afterworld, it was to say that he was the master of Things Beneath the Earth - which for our purposes here - also would include the dead who have been burried.

I feel as though of these cultural gems are very important to the understanding of our belief systems. Whether they be superstition or not, they influence us to this day and I keep seeing trends which suggest that all of our knowledge has grown, ever so slowly, with a combination of our superstitions and philosophy.

Ironically... Charon is a relatively light-hearted subject to study in comparison to many of the more in-depth subjects which one can follow. I found these links to be useful in my research.