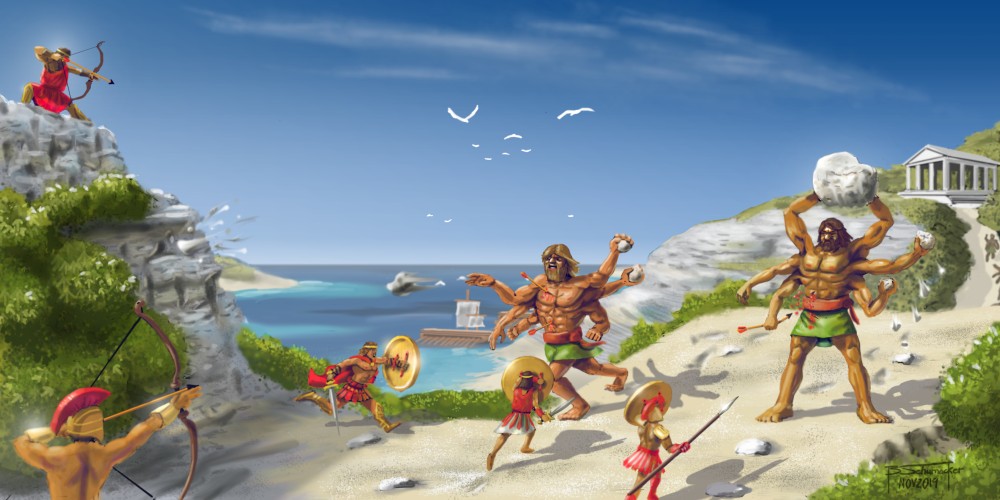 Within the Propontis (The Sea of Marmara), there was a steep sloping island.
Here lived a fierce and lawless tribe of natives who had been born with 6 arms each.
These monsters were the Gegenees.
The people of Doliones shared this territory with the Gegenees but were not bothered by the monsters.
Poeseidon, the god of the sea, protected the Doliones.
One day, the Doliones people and their king, Kyzikos, welcomed Jason and the Argonauts as they traveled through this area during their famous journey.
On the first morning of their stay, the Argonauts wanted a better look of the sea ahead of them and so they dared the mountains which divided them from the Gegenees.
The Gegenees were savage, they fought with Jason and the Argonauts to block their way, and to trap them to their doom.
It just so happened that Heracles was here at this time and he lept to duty, shooting down so many of the Gegenees monsters with his mighty bow. The rest of the Gegenees were left for the Argonauts to deal with.
The Argonauts finished the Gegenees and left them as feed to the birds and fish of the ocean.
It is speculated that Hera and Zeus inspired these beasts as an extra labour for Heracles.

This was my very first illustration for this series and I wasn't quite sure what to do at first. I looked through a long list of various Greek Myths and I wanted to choose something very unique and interesting, while still vaguely recognizeable. This would set the tone for the rest of the series - so as to say: "This isn't just another Zeus or Hercules event." And the Gegenees proved to be a fair chose to set us apart from that.

I knew very little about Greek Mythology going into this series. I had heard of "Jason and the Argonauts" but I didn't know much about them. So it was a pleasant surprise. I had found the Gegenees by sorts of "picking from a hat" at random draw, and now I got to learn a bit about Jason and the Argonauts to boot! But wait! Heracles is involved too? Well all the better then, I suppose! :) I am new to all of this, so let it rain!

THUS. A new premise was also established very early on in this illustration series. I learned that it would be much more complicated than I originally thought, and I learned quickly that all of the myths have a tendency to intertwine. This was good news in the long run because I learned a lot and it was all incredibly facinating. But I can't neglect the truth - that it was also a bit daunting as well.

I am not a scholar of Greek Mythology, but throughout my years of illustration I have learned something. "If you are going to portray a story, do it accurately." And this is a pretty tough bar to hold with Greek Mythology, because the stories have many variations depending on which version you hold, and obviously it can be highly subject to interpretation and cultural difference, or even personal biases.

In the end I put together the best of all the information I could find and rested upon what I found to be both reasonable and universal. The results of course, are the above illustration.

It seems most of the knowledge on this myth comes from The Argonautica, which is the story of Jason and The Argonauts. I found some translated reference from Gutenberg at this link, and the specific paragraph copied below.

(ll. 936-960) There is a lofty island inside the Propontis, a short distance from the Phrygian mainland with its rich cornfields, sloping to the sea, where an isthmus in front of the mainland is flooded by the waves, so low does it lie. And the isthmus has double shores, and they lie beyond the river Aesepus, and the inhabitants round about call the island the Mount of Bears. And insolent and fierce men dwell there, Earthborn, a great marvel to the neighbours to behold; for each one has six mighty hands to lift up, two from his sturdy shoulders, and four below, fitting close to his terrible sides. And about the isthmus and the plain the Doliones had their dwelling, and over them Cyzicus son of Aeneus was king, whom Aenete the daughter of goodly Eusorus bare. But these men the Earthborn monsters, fearful though they were, in nowise harried, owing to the protection of Poseidon; for from him had the Doliones first sprung. Thither Argo pressed on, driven by the winds of Thrace, and the Fair haven received her as she sped. There they cast away their small anchorstone by the advice of Tiphys and left it beneath a fountain, the fountain of Artaeie; and they took another meet for their purpose, a heavy one; but the first, according to the oracle of the Far-Darter, the Ionians, sons of Neleus, in after days laid to be a sacred stone, as was right, in the temple of Jasonian Athena.